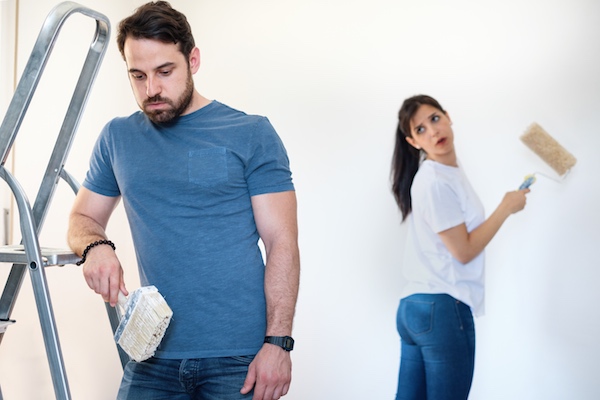 At MyBuilder, we're always on the side of hiring an expert when it comes to improving your home, to ensure you get a job well done.

Now, we know just how important ditching the DIY is - since attempting a home improvement job yourself could ruin your relationship.

According to our latest research, half of all the relationship renovators said that their sex life suffered in the wake of a DIY project, with 8% saying it was a total passion killer.

The study found that one in ten British couples who work on a big DIY project together have been driven to the brink of a breakup as a result, with rowing leading to 7% of couples actually splitting up.

It's no surprise that the research has revealed that doing up a house yourself is one of the most stressful things you can tackle in life, more so than having a baby, getting divorced or taking exams.

Over three quarters (77%) of the people who’d attempted big building works with their partner admitted they’d had furious rows during the project, with 15% claiming they were constantly at each other’s throats.

In the end, 58% of people who’d attempted DIY with their partner said they’d never consider doing it again.

According to the research, just the thought of DIY is enough to make our anxiety levels go through the roof.

14% of the 2,000 adults we surveyed said just considering tackling home improvement themselves leaves them feeling stressed out, while a sensible one in six homeowners think that any financial saving from DIY simply isn’t worth the pain.

Thankfully, there's a less stressful way to go about improving your home - hiring an expert. On MyBuilder, there are thousands of tradespeople in every possible category ready to get to work on your home - so next time you're tempted by a spot of DIY, why not simply post a job instead?