A lot of tradesmen will tell you that it’s not looks that count - it’s about the things you don’t see, the stuff behind the scenes, all the little details that a homeowner doesn’t think about, but a tradesman needs to get right. But that’s not always the case.

“With a carpet”, Wayne Mockble tells us, “it’s all about how it looks.”

Wayne should know. He’s been fitting carpets around Birmingham for 30 years, taking on jobs big and small. In the three years his business, Fast Fit Flooring, has been on MyBuilder, he’s built up 278 pieces of positive feedback - and no negatives. In short, he’s a man who knows his way around an Axminster. But despite what he says about how much appearance matters, after a morning spent watching him at work, it’s easy to see how much effort goes into getting that perfect finish.

After a short stint in the army as a teenager, Wayne started out as a tradesman when he was only 18 years old.

“I needed to find some work,” Wayne explains. “When I was 18, I already had two kids to feed, so I had to come up with something. By chance I met a carpet fitter who wasn’t able to drive. He said, if I got a car, I could drive him around and learn the trade from him. It really was a matter of watching him do it. He wouldn’t tell you verbally, you just had to pay attention.” 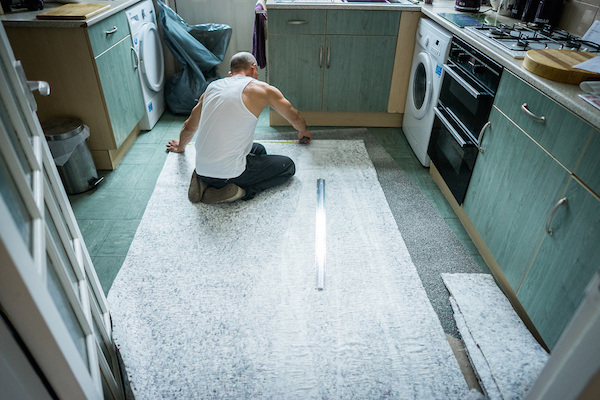 Slowly, Wayne began to pick up the trade, learning as he went. “You come to realise, it’s a very technical job,” he said. “People might look at a room and think, a carpet for that, oh, it’s only a square, but it rarely is. Your preparation is very important. There’s a saying - measure twice, cut once - but you want to measure more than twice. Measure ten times if you can.”

When we catch up with Wayne, he’s halfway through a job fitting a new carpet and underlay for a staircase and landing. As we watch him work, it’s plain to see the attention to detail that goes into what is a relatively simple job.

“If it’s an old house, the stairs are all going to be a bit out,” he says as he measures up. “These two here are bigger than the one above. Then this one here is bigger again. It’s a nightmare sometimes. But some people without any experience will just measure once at the top of the stairs and just get on with it. You’re making problems for yourself then. You can carpet each stair individually if you have to, because the joints are all hidden, but it’s not ideal.”

Wayne works quickly, with simple tools, cutting with a razor-sharp carpet knife and knocking the edge of the carpet into place with a chisel. “My chisel is 20 years old and it’s still going strong,” Wayne says. “It cost me £5 back in the day. They probably cost a bit more than that now.” He cuts and pushes the carpet into place, casually swapping the tools between hands- as he says, “You have to be ambidextrous in this job, it can’t be done all with one hand. And you need to be accurate and confident. You can’t be cack-handed.” 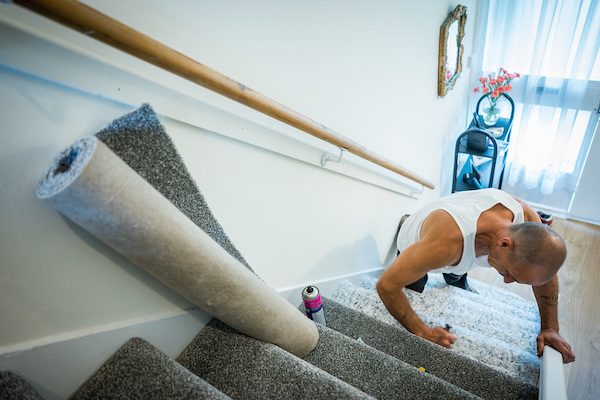 The knife gets a new blade for every job - even between doing his cuts, Wayne swaps out the sharp blade before putting it away. “The first thing anyone asks me when they see what I do is ‘Have you ever cut your finger off?’ I haven’t but I’ve come close a few times. Half the time the biggest problem is nals and things sticking out of floorboards.”

When it comes to cutting neat, long lines in the carpet, Wayne doesn’t need any fancy tools: “A door bar is the best thing for getting a straight edge, and you need a straight edge with your carpet.”

Wayne is insistent on using good quality materials. “If your grippers are no good, it will make things very difficult. I also try and use glue where I can to make sure it all holds well - it costs a bit more money, bit it gets it done properly. Underlay is another thing, some old types had a black rubber back that will just perish into dust over time and leave flat patches under the carpet, you need to use a good one. It’s like any trade, there are plenty of cowboys in this game, I know which shops to avoid. There are also fitters out there who’ll tell you that underlay costs £150 a roll, when actually it was only £20. People don’t know.”

Wayne always encourages people to buy their own carpets, while he deals with the fitting. “I can give them advice, but it’s up to them to buy it. Supplying it can be a minefield - I could buy it all, bring it along, and then they change their mind; what do I do then? If I get my fitting fee, I’m happy. I’ve worked with carpet that was £85 a metre - you can’t go making mistakes with a £3,000 carpet.” 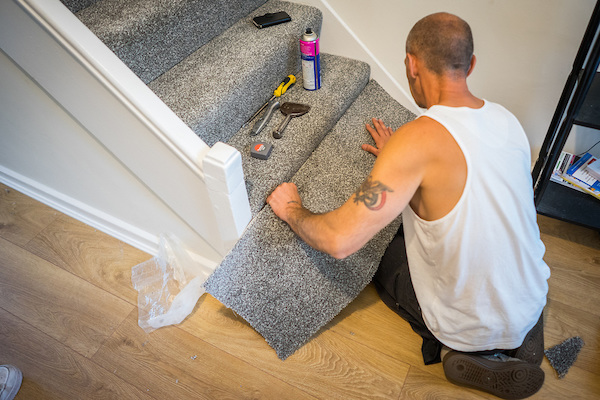 One thing he insists is on getting accurate measurements before starting any job. “If people give me measurements they’ve taken, that’s fine, but I want to go and measure up myself. They’ll have measured wall-to-wall but not take into account the leeway you need. If I fit it as they’ve told me, and there’s a gap or a join somewhere, they won’t thank you. I have to go and visualise the whole job first.”

After his initial run learning the ropes, Wayne has always worked by himself. “I like having the freedom, I pick and choose the jobs I want. Like any self-employed person, you have moments where it goes quiet. You’ve got to have some heart to soldier on when it gets like that. I’m not one of those people who has another job - this is my livelihood”. Thankfully, Wayne has been able to keep on going, even through the rough times, and his reviews on MyBuilder help him to keep winning work for some time yet. “I always ask people to leave feedback. I just ask, if they’re happy with the work that I’ve done, leave a bit of feedback, because it really helps me out.”

After finishing off the last stair, carefully following the curved line of the final riser, this looks like another job that will see positive feedback. We know how much work went into it, but the finished result if effortless. After all, as Wayne says, “it’s all about how it looks”.