Ronnie Carr is a roofer who’s been a member of MyBuilder for 4 years. Hailing from Bolton, he began in the trade as a fresh faced 16 year old lad, taking after his dad and uncle who were roofers too.

We first met Ronnie at the Liverpool trade meet-up, and I’d arranged to interview him then. However, the beers were ordered and he ended up telling me all about his faithful canine friend Milly instead - the dog goes to work with Ron every single day! I gave him a call this week to catch up with our September Tradesman of the month… 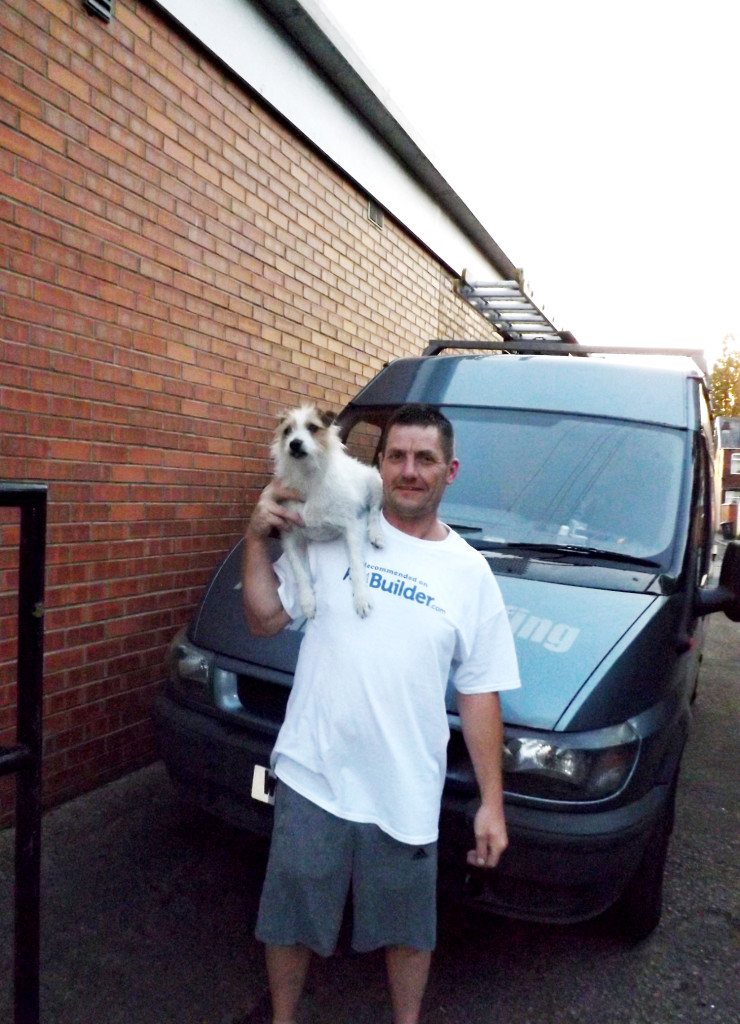 When Ronnie joined MyBuilder, he didn’t use the site properly for two years. Work then got a bit quiet so he gave it a proper go. The rest is history as they say! He’s won a whopping 105 jobs through the site, and more from other people Googling his profile.

First thing I asked was 'what's his favourite part of the job?'. He exclaimed, “The sunny weather and the sun tan!” I’m still not convinced it’s that sunny in Bolton, but I'll take his word for it. After all, a roofer is higher in the sky than most of us.

Currently he’s working on a large barn conversion. A cowboy had carried out a terrible job and then Ron was hired to rectify the work. “It’s been a challenge!” he told me, “But I really like that. The best jobs are the ones that are challenging.”

He has one lad working for him and tends to pick and choose the jobs he wants to do these days.

“I’ve got a load of work off the site. I also get a lot of work where people see my profile, read up on my feedback and then contact me outside of the site - so I get extra work that way.”

The challenges of starting out on MyBuilder

Lots of tradesmen find it hard to get those first bits of feedback, but Ronnie took it in his stride.

“I found it easy. It gives you a buzz to get a feedback, so I kept going for the jobs. Unlike work that is not found through the site, you’re getting public recognition, so that’s the good thing about it. It kept me going at the start.”

And now Ronnie uses his feedback to win new work.

“Instead of talking yourself up, you just sit there and go, “Read that!”. You know, that’s the good thing about it. And because of the feedback system they know it’s not self-made.”

I asked him for his secret recipe to win work.

Ron reveals “Don’t tell the customer what they want. Advise them instead. Nobody likes an up-sell. I say, “I advise you to have this sort of roof, not that sort,” you know. And it’s knowing about my trade, I know what I am talking about. But listening to the customer is the main thing to understanding what they need and want.”

Technology has changed for roofers with a lot of people now giving quotes from looking at properties on Google Earth.

Ronnie takes advantage of the benefits to this such as having a quick look at the type of tiles on a roof before going out to an appointment. It’s not always possible to tell, and he would never give a quote to a customer based on this alone. But sometimes he says it can save him time, because he knows the type of roof and what he’s going to need for the repairs before he goes out. Once he’s on a job he can give a customer a solid quote.

He also has no issue going out to price jobs, "It’s all part of the job. You’ve got to go and price lots of jobs. You’re not going to win every one – I don’t. But it doesn’t bother me, because I know I’m not going to win them all and realistically don’t want to, because if you won every job you’d be like a blue-arsed fly, wouldn’t you!?”

I also asked if he used any other type of marketing for his business.

“I have a Facebook page and I’ve got MyBuilder. That’s it – which is good enough for me.”

In the past he used a local church magazine but he says “I’ve got busy, a hell of lot busier through MyBuilder.”

What advice would you give to other tradesmen?

“Just listen to the customer and make sure you do a good job. Know your trade well and be willing to explain everything in detail to the customer. Sometimes customers have been burned in the past and want peace of mind that you’re reliable and know what you’re doing.”

The worst part of your job?

“Telephone cables and washing lines! I fell off a roof once, luckily I landed on the scaffolding. I’d be a dead man if that wasn’t there.”

What’s your favourite type of roof to work on?

“Slate. All day long! I just like doing slates, you feel like you’ve achieved something. When you’re doing an awkward one it takes time to get it right - and that's satisfying.”

Congratulations to Ronnie and we hope he continues to roof the houses of Bolton through the site!