Nearly 30 years ago, a young Mick Scott was learning his trade on building sites in Middlesbrough, but work was sparse. “Word on the street was ‘move down south and you’ll make loads of money’”, he told us. He and three mates hatched a plan to take the skills they had learnt on site and make a bold move to find their fortune. “We got our final paychecks and were ready to go. But when it got to the day we were due to set off, only I turned up”.

Undeterred, Mick stuck to his plan. “I was in my Mini Metro and I thought, sod it, I’m going”. But finding work wasn’t as easy as the rumours had him believe. “I travelled around London and the South before finding myself driving into a big compound in Kent. It turned out to be the Channel Tunnel building site!” After a trial day driving the machines, Mick secured a job and spent the next 15 years travelling the country working on huge infrastructure projects.

But it was a solitary life, “I lived in a caravan on-site most of the time doing a lot of night shifts”, explained Mick. Fifteen years later, he took the decision revive the skills he learnt all those years ago.

After years of travelling and living a transient life, Mick wanted to start putting down roots and become a full time tradesman, “working on building sites, you’d learn a lot of different trades”. Settling in Milton Keynes, he chose to focus his efforts on the projects he enjoyed, bathroom and kitchen fitting.

From the beginning Mick wanted things done right. “I didn’t want just a column in a local newspaper”, he said, preferring to create a professional website using a designer. The professional approach paid off, “at first I was unsure about going back to being a tradesman, but somehow the first year of trading was phenomenal!” 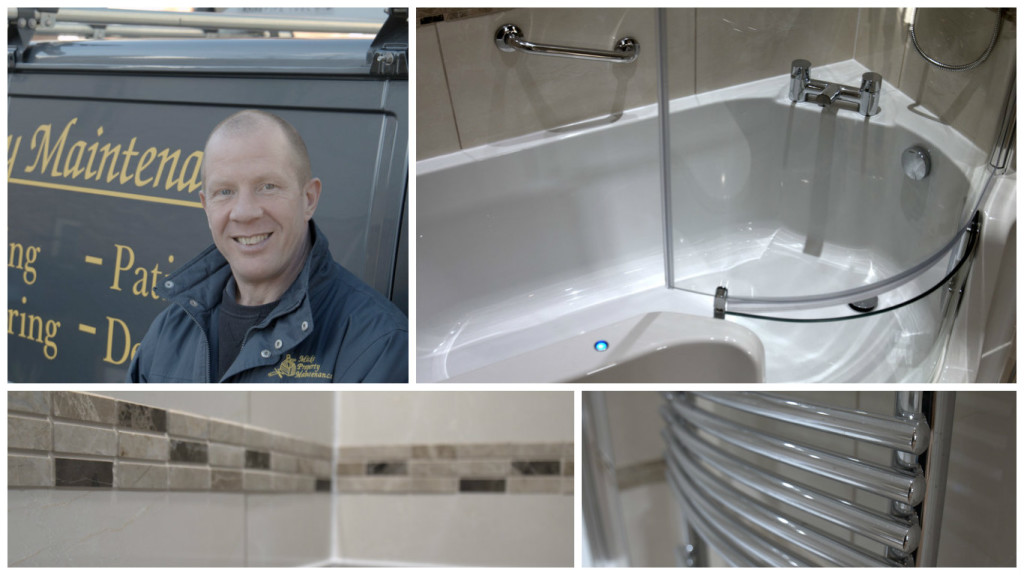 A bathroom job completed by Mick from Mick's Property Maintenance[/caption]

When we met with Mick, he was working in a retirement home for a client who was refurbishing a whole flat for his mother as a surprise. As she suffers from dementia, Mick had to make sure it was not only great quality, but accessible too. The bathroom was finished brilliantly, the son was beaming and couldn’t wait for his mum to see it.

We asked Mick about his favourite recent job. “I was asked by the council to refurbish the entire toilet block in a community centre”, he told us. “I had to rip out all the old toilets and change the configuration completely. I did it all myself”. Seals of approval don't come much bigger than the mayor coming to reopen the community centre. “He was really happy to see the outcome, it was completely different to before”.

The downsides of physical labour

Despite his success, it’s not all been plain sailing as years of physical labour has taken it’s toll on Mick. “I get a lot of pain down my ribs and spine, I’ve had over 400 injections in the last few years”. Reluctantly, Mick has even had to take time off, but luckily he’s been saved by the love of a good woman. “I’ve come close to packing the tools in, but my wife really looks after me. I know it’s an old saying, but behind this man is a bloody good woman. You could say she is my new backbone”.

Whatever happened to the likely lads?

“I went back up to Middlesbrough a while after I found my feet’, said Mick. “By now I had a better car. I met up with the three lads that bailed on me. When they heard about my success they asked me to take them back down with them!” Mick politely declined. “I took the chance, I could have been unemployed, but you have to make the opportunities for yourself”.

These days, Mick wins a lot of work through word of mouth, and with his excellent customer service skills it’s easy to see why. Every Christmas, his customers receive a Christmas card from Mick himself. He's also been spoilt by many of his happy customers, “I’ve had customers send me bottles of champagne, boxes of chocolates, all sorts!”

Taking chances seems to have worked well for Mick. He’s now settled with a thriving business and has just celebrated his 10 year anniversary with his wife Paula. Now he can add Tradesman of the Month to his list of achievements!

Mick’s top tips for other tradespeople