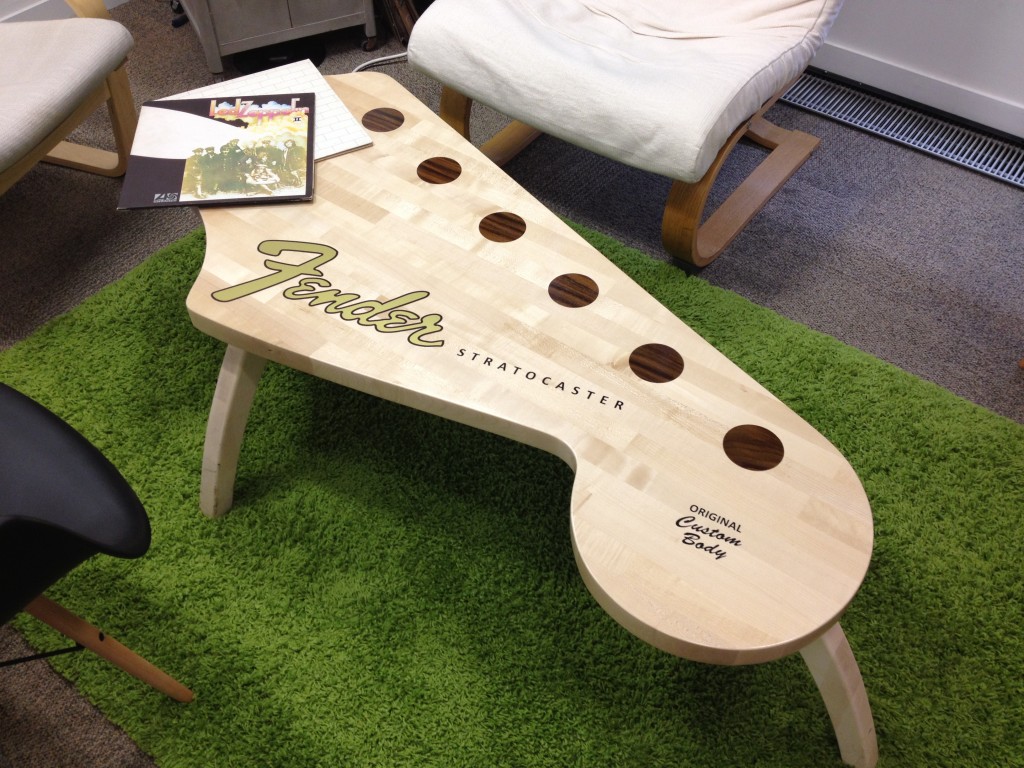 A while back, I decided that it would be good to do some team projects. The idea was to split up into three-person teams that would do something creative together on the weekends. I thought it would also be nice to bring the projects into the office to make it feel a bit more like our space.

I grouped myself with Andy (designer) and Sten (software engineer) and our project was to make a coffee table for the meeting room. I thought that would be a good project for us, since we all like working with wood and I have a garage and tools.

Andy came up with the idea of making a Fender Stratocaster headstock coffee table, as we all play the guitar. I think he had seen something like that before or heard of someone making one. A Fender Strat was my first guitar and I even once owned a 1965 Strat with an original sparkle blue paintjob. A true rockstar axe! Anyway... needless to say, I loved the idea. It was a challenging project and a lot of early morning to late night weekend work, but here's how we did it...

The first thing to decide was what to make the table top out of. Fender necks are maple, which isn't too easy to find in the UK.  But after a bit of digging, I found some places that sold maple kitchen worktops and they weren't as hugely expensive as I thought they would be. Next, we had to work out the size. Andy made a design in Illustrator that gave us the outline of the table shape and we could play around with that to figure out how long we wanted it and therefore what width of worktop we needed to order. We ended up going for a 720mm width and the minimum length was 2m. We were going to have plenty of scrap left over to make chopping boards out of!

I was also worried about the thickness. Standard kitchen worktops are 44mm thick and I thought that we would not be able to cut 44mm of maple with a jigsaw. Maple is pretty hard and I was really concerned that we would fall down at the first hurdle. I phoned up the worktop vendor and he said that we shouldn't have a problem cutting it. He was right. It was slow going at times and there was some annoying popping of the end of the blade because we were at max depth for my Jigsaw, but the hardness of the wood did not present any difficulties.

We sent the Illustrator file down to the local printer and they printed out a life size paper version of the table top. I cut the paper out around the outline and then taped it to the maple worktop. That became my Jigsaw guide and I just cut right through the tape along the outer edge of the paper. Then I used a rotary sander to smooth it out and round the edges a bit. There was a fair bit of sanding and a lot of 'artistic eye' went into making sure that the curves were perfect, but that bit was not very difficult.

We had seen two ideas for representing the tuning pegs on the headstock on tables that others had made: stickers (ugly) and stainless steel disks (weird). At the last minute we decided to use rosewood inlays. This was an inspired idea. Sten said: 'Why don't we do inlays?' and I thought: 'Rosewood!'. The fretboards on these guitars are usually made of Rosewood, so it would certainly look authentic. It would also look beautiful. But we didn't know exactly how we were going to do it.

Inlays are straightforward enough, but big circular inlays would look really bad if they weren't perfectly circular. You just can't cut a perfect circle with a jigsaw or even a handsaw. This was definitely going to be the trickiest part of the project.

A hole cutter (drill attachment) to cut the rosewood circles was an obvious choice, but there was a problem. A hole cutter is for cutting holes, not circles. The inside circle that you get as a result has a drilled hole through the middle because hole cutters use drill bits as guides. Even after you figure out how to get perfect Rosewood circles, you still have to use a router to route out the circular depressions in the table to fit the rosewood circles. And how do you route a perfect circle? We didn't know.

This is when I got in touch with my carpenter friend from across the street. I knew he'd have a router, so at least I could ask to borrow it. I also asked him how we might cut a perfect circle and he said that his router bit has a bearing on it, so that you can use a template and the outer part of the bearing will ride along the inside of the template and the bit will cut exactly the same shape as your template. Brilliant. As long as we could get a perfect template we could reuse it six times and route out the table. We could obviously use a hole cutter to make the template.

Then I asked him about cutting perfect rosewood circles. He said that avoiding the hole in the middle was no problem. You just cut a hole in a piece of plywood and then stick that over the rosewood, remove the drill bit and use the plywood as a guide instead of the drill bit. Of course!

Everything hinged on the hole cutters. You can't use the same hole cutter for the rosewood and for the router template. The difference between the outside and inside diameter of the hole cutter was great enough that the circle would be much smaller than the hole, leaving a huge gap and a hideous inlay. So I went to the shop and bought two hole cutters that were as close as I could get, hoping that the inside of the bigger one was close enough to the outside of the smaller one to make it work. So we tried it out and... nearly! With a bit of careful sanding of the circles and the guide, we were there. They fit like a glove.

We cut six rosewood circles and did a test routing in a piece of scrap to get the depth right. We didn't want to ruin a £200 piece of maple though, so it was a case of measure three times and cut once. It went swimmingly and after gluing in the inlays and sanding it, the table top was stunning. Absolutely beautiful and worth every minute of effort. 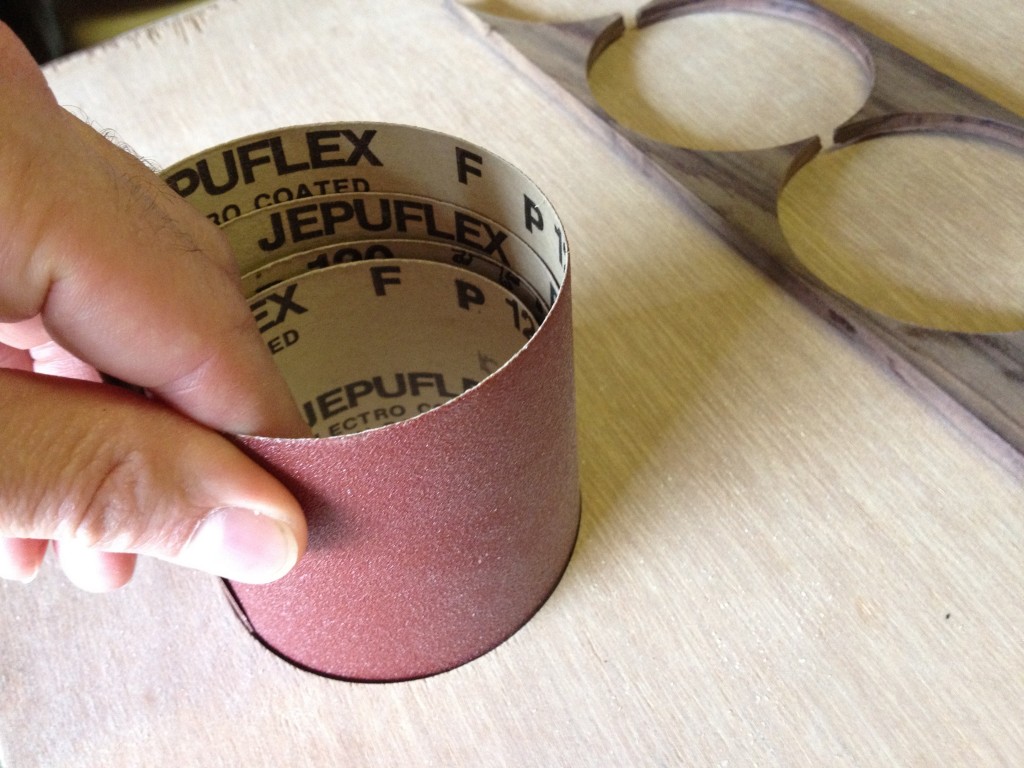 The router template hole was slightly too small for the rosewood circles, so we had to sand it.[/caption] 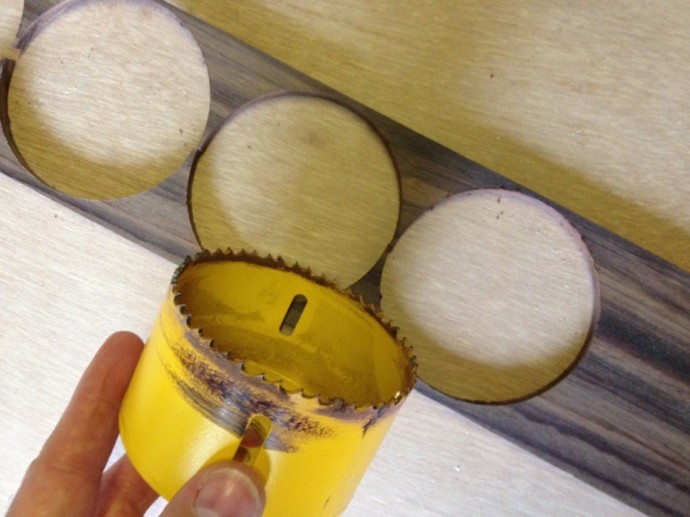 To avoid drilling a hole through the middle of the rosewood, we had to remove the bit guide and make a template guide out of plywood.[/caption]

We decided to postpone the decision on what to do about the table legs. We couldn't think of anything that would look good and ended up looking around to buy some pre-made legs. No joy. We didn't want to do simple dowels because that would look too cheap. We just carried on with the top without a plan for the legs.

As we were cutting the top, however, Andy picked up one of the pieces of scrap and looked at the curved shape. He said: 'Maybe we could use this for the legs'. The shape was quite beautiful and we both sat down to start drawing some table leg shapes. I cut one out, we sanded it down, held it up to the table and... yep, that was it!

The Fender headstocks have a fender logo, the word STRATOCASTER and Original Custom Body. They're basically just stickers that are then varnished over. We thought, let's just do the same thing! We went back to our local printer and gave them a file that Andy had designed and they made a giant sticker for us with all the letters individually cut out.

Sanding the table seemed pretty straightforward, but we were concerned about the issue of a raised grain. When you sand some wood and then get it wet it is not smooth anymore. The dampness raises the grain and makes it rough. We've heard that if you get the wood wet, let it dry, then sand it and repeat, you can eliminate the problem. Eventually it stays smooth even after getting wet. This was an issue because the varnish we were going to use was going to raise the grain once applied.

I think I must have gone through this process 10 times or more, over a period of a week or two, so it was pretty tedious. But sure enough, it stayed perfectly smooth even after getting it wet. Finally, I was able to apply the stickers. The table was really looking nice.

Since we were varnishing over stickers, we really couldn't screw this one up. We tested a polyurethane, which had a yellowing effect, and then settled on an acrylic satin varnish made by Polyvine. It was beautiful, with no colouring. It has proven to be really durable as well. We applied three coats, and sanded after the second. I used a 600 grit paper, which was too course in the end because if you look carefully, you can see little scratch marks. I'm still disappointed about that one, but apparently no one else can notice. I also regret using a brush, because you can see brushstrokes. But I don't know what would have been better. If anyone has any ideas, let me know.

All in all, we're really pleased with the result and the table sits resplendently in our meeting room, along with our 1960s tube amp vintage record player. Our Pink Floyd records sound even better now.