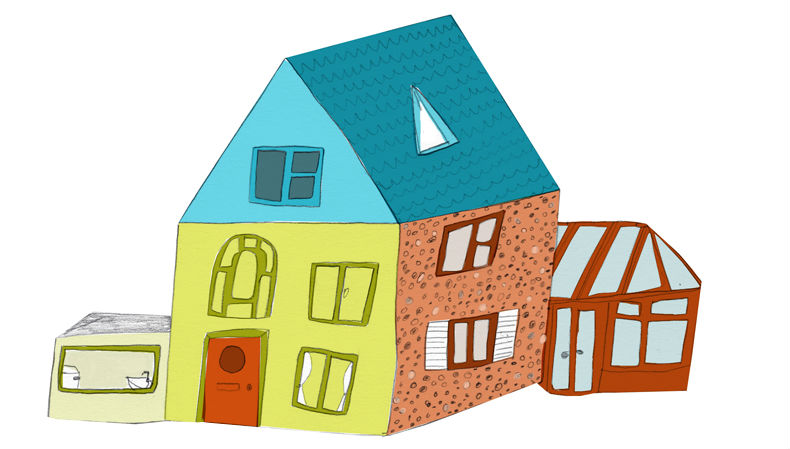 Home improvements should generally add value to your property and make it more enjoyable to live in. Then there are projects that could ruin the look of your home and send buyers running for the door.

Here are but a few of the home improvement projects you should think twice about before taking the plunge.

This nasty, textured coating was daubed over many a ceiling and wall throughout the 70s and 80s. Modern artex doesn't contain traces of asbestos like it did in the 70s but there are other good reasons why you should leave well alone. Artex is practically impossible to remove without tearing strips off your knuckles, or gouging holes in the ceiling. To get rid of it, you'll need a plasterer to skim the room. You should also think twice about choosing artex if you want to sell your home - most people hate it which could impact the sale price.

A worrying trend is developing up and down the country where people are turning their gardens into small 5-a-side football pitches in the name of low maintenance. We don't care what people say in defence of artificial grass, it's simply not acceptable in a British garden.

Changing the layout of your home

Aspirational home improvement shows have turned ordinary folk into visionary property developers. Knocking down walls and creating new rooms can be a smart way of adding value to your home. Get too carried away with the sledgehammer however and you could see the asking price tumble.

An ensuite bathroom is often given the thumbs up by estate agents and potential buyers. Creating a well proportioned en-suite in a sizeable master bedroom would probably add value. Shove a pokey shower room into the corner of a small bedroom though and you're likely to scare buyers away.

Open plan layouts are fashionable these days, particularly in period properties. Go easy with the loft look though. Removing a hallway so that the entrance opens into the living room can be off-putting, as can building a staircase in the middle of a reception room.

Above all, no matter how tempted you are to turn 'that box bedroom' into a walk-in wardrobe or mammoth shoe cupboard, don't. Removing a bedroom, no matter how small, is likely to knock £££ off the value of your home.

Applying masonry paint to brick or stone is possibly the most fun you could have with a paintbrush. Pause for a minute though before you commit to livening up that tired old brickwork with a lick of paint. You may be glossing over underlying brick problems that could cause freshly applied paint to flake off. You can also expect to repaint it every three to five years. Finally, it's worth noting that removing paint from brick or stone is extremely difficult, if possible at all.

This spiky exterior finish has been used to to cover walls in England and Wales since the the turn of the 20th Century. Fashionable for a time, it was commonly used by builders to cut costs and cover up poor quality brickwork. Use has declined since then, but it's indelible mark has been left on millions of semi-detached suburban homes.

So why should pebbledash be consigned to the history books? Supporters might speak highly of it's hard-wearing characteristics and low maintenance. It's near indestructible qualities, however, make it nearly impossible to remove without destroying the brickwork - meaning that you may live to regret peppering your walls with the stuff. Or maybe you won't - it's not unusual for pebbledash to last 70 years or more without maintenance. It's also a nightmare to paint and likely to lower the value of a modern home.

Even the best maintained windows and doors will need to be replaced at some point. When this financial bombshell eventually lands, the choice of materials available to most of us will be either PVCu or timber. All replacement windows must comply with building regulations, so a timber framed window should be as safe and energy efficient as it's PVCu cousin. The deciding factor for many people is cost. Timber framed windows are often significantly more expensive than PVCu. So why should you think twice about choosing PVCu?

Supporters (salesmen) will claim that PVCu is hardwearing, long-lasting and easy to maintain. What the brochures won't tell you is that PVCu degrades in the sun, becomes permanently discoloured if not cleaned regularly and that window mechanisms require annual lubrication and adjustment if they are to last for the advertised lifespan (typically 20-25 years). Damaged windows can be extremely difficult to repair and units that mist or fog will usually need to be replaced. PVCu is also environmentally hazardous. It contains the chemicals chlorine and dioxin, making it a material that is both expensive and dangerous to recycle. Last but not least, many people dislike PVCu windows which might well make your house less saleable.

Before central heating was introduced in the 1970s, fireplaces served a very practical purpose, heating British homes throughout the cold winters. Over the decades that followed, period fireplaces were gradually discarded and hearths were either filled with decorative paraphernalia, or simply covered up. For many, chimney breasts were something that, if removed, would make the room bigger. What could make more sense?

For a start, the chimney forms an integral part of the house structure so you will need to get a structural engineer involved. Removing a chimney breast from any part of the house without suitable support may cause serious structural damage or worse. Without building regulations approval you could also face prosecution which in turn will cause problems when it comes to selling your home. Don't forget the neighbours either. There's a good chance that works may be governed by the Party Wall Act.

Chimney breasts are built using bricks. Lots of them. As you might expect, they also contain lots of soot. Plan on filling several skips and living with dust for weeks or months afterwards. You will also need to make good each room afterwards which might include fixing joists, plastering walls and decorating.

One final point to consider: it's highly unlikely that you'll ever have an open fire again. That may suit you down to the ground but prospective buyers may not share your point of view - especially if you live in an otherwise well maintained Victorian town-house.

If you're seriously thinking about carrying out any of the above home 'improvement' projects, do yourself a favour and call the experts in first.