Day three of the garden makeover is a blur.

With no phone signal and limited wifi, the only way to contact Travis Perkins to sort the trellis and shed delivery looks like being semaphore – or at the very least beacons lit across hilltops. You pay for the wondrous peace and quiet here in Devon with these small inconveniences! On the plus side, even on a cloudy day you are rewarded with fabulous views from Jon’s garden. 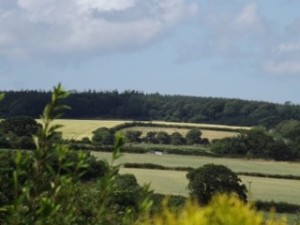 Julie, Jon’s wife, stays over so that we can interview her. A strong quiet presence around the house, she churns out beverages and clears up afterwards with patience and a smile. At times there are as many as eight people trooping in and out of Jon’s small front room but she views the carnage placidly and points to the carpet cleaner when we worry out loud about imported dirt. It will, she assures us, be sorted within minutes of us leaving.

Procuring a sandwich for lunch proves more of a challenge. The village shop in Sheepwash never seems to be open when we need it and the store in the neighbouring village has a choice of three sandwiches - individual sandwiches that is, not types of sandwich! A choice that is quickly reduced to two, when one sandwich pack turns out to be past its sell-by date. goodbye tuna and mayonnaise!

We fare much better with evening meals at the Half Moon Inn in Sheepwash, which are delicious and large enough to feed a small army. One day we opt for a packed lunch from the pub as well - yummy but perilous for the waistline! Andrew the landscaper has to step in and help out by eating half of a Devonshire Blue Cheese with grapes baguette, which is the size of a small car. 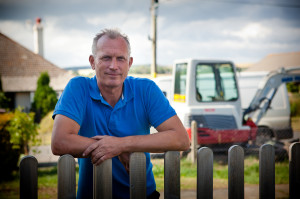 During our visit the MyBuilder location team takes time out to visit a building project in Launceston. No improvement on the sandwich situation there! Even Cornwall is proving a sandwich desert.

The job we are featuring is the renovation of an old tollhouse near the centre of town. For the last two years, MyBuilder tradesman Ashley Officer has been doing up the place for his mother-in-law who lives in Spain but needs somewhere to stay when she visits the UK. We film the lovingly crafted features and carefully thought through work and living spaces, the product of hours of weekend and evening labour. Trouble is that it’s taken so long that Cupid has found time to intervene. Mum-in-law has found another home and heart to go to, so Ashley’s pride and joy is now on the market. 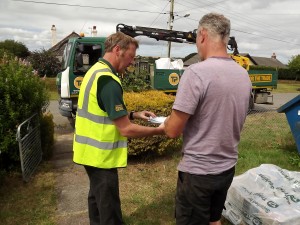 Back in Sheepwash that afternoon and the Travis Perkins driver up rolls up with the already assembled and rather large shed in one piece on a lorry. Andrew’s off collecting materials so the MyBuilder team plus Charlotte from Tarka Housing, who has been painting Jon’s old shed, stand around scratching their heads. How to move the shed into position? The obvious answer is the digger but since none of us know how to operate the thing, we are stymied.

Eventually Andrew returns and drops it into the garden, ready to be manhandled into place. A huge mention should be made here for Alan Hammett, the Travis Perkins driver who came in off holiday to deliver the shed. Sterling work, Alan! Thanks too, to Gary King from Travis Perkins Barnstaple branch...you warned MyBuilder the shed was yellow but this shed is canary yellow. It is the yellowest shed any of us have ever seen. Blindingly yellow, awesomely yellow, very yellow. Time for Jon to do a little painting and another humongous feed at the Half Moon down the road! 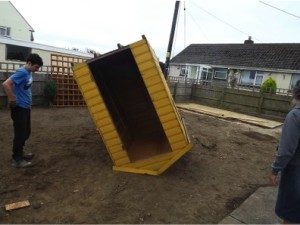 Friday morning arrives and the clock is ticking. Andrew and Eli have manoeuvred the shed into place, not without incident from the look of it!

The turf is laid and most of the plants are in. Daisy, Jon’s collie, takes up her sunbathing position on top of one lavender plant flattening it nicely and Andrew departs collect the gravel for the shed area just as John and Richard from ITV South West arrive to film! 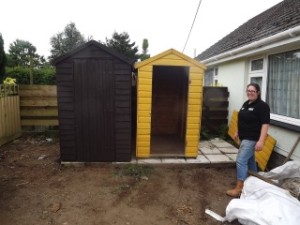 In time-honoured fashion plenty more tea is drunk and a bit of filming done while we wait for Andrew to return. Lots of stories are exchanged too. We learn that Jon used to drive F1 cars around from race to race when he was younger and once had to park one of these racing monsters, worth millions, outside his house for the weekend because the venue he was taking it to was closed. The F1 bosses didn’t turn a hair but it got Jon’s neighbours talking!

Andrew and Eli reappear with gravel and both Pete, the MyBuilder cameraman, and ITV’s John set to work filming the gravel spreading. Eli stars on wheelbarrow while Jon ceremonially plants an apple tree. As the finishing touches are made to the garden, Charlotte from Tarka Housing pops in to see how things are progressing and end up sweeping the yard – no peace for the wicked eh, Charlotte? 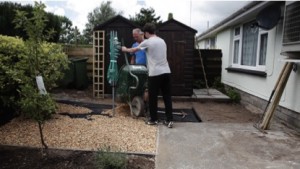 All too soon it’s over! After months of planning, all the donations and Andrew’s hard work, the project is all done and dusted in the form of a gorgeous new garden for Jon. It feels very odd driving away from Jon’s house, where we effectively took up residence for five days, and it's rather sad saying goodbye to Jon, Andrew and Eli. Contemplating his new garden, the normally garrulous Jon is almost speechless – or perhaps he's just worn out by so much company, endless chat and continuous tea and coffee-making. 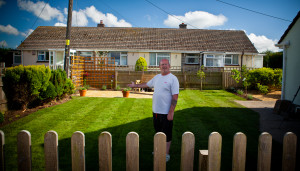