It's day three of the MyBuilder competition garden build and what a day! Jon Mason, winner of the garden competition and a stroke survivor, is so excited that he’s out photographing MyBuilder landscaper Andrew Greenhill’s every move and chatting to the neighbours, who turn out regularly to watch progress. Jordan, Jon’s 14-year-old son is visiting and making industrial quantities of tea.

“I’m going from having the worst garden in Sheepwash to having the smartest,” Jon proudly announces to the Devon Journal reporter, Nicole, who pops in for a quick interview. 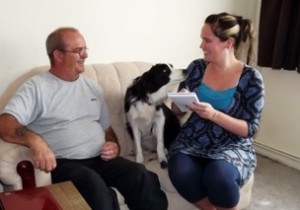 Daisy, his faithful border collie, is not so sure about it all! Every new arrival is greeted with a suspicious volley of barking and visitors are rounded up like sheep and escorted smartly to the living room. Turns out that the Devon Journal team, Mike the photographer and Nicole the reporter, are cat owners so can you blame her?

Photographer Mike is also a digger fan and can barely take his eyes off Eagle Plant Hire’s donated digger. Jon lets us in on a secret – it took two people to get him up into the cab but he was determined to seize the photo opportunity...and no, he’s not really driving, Andrew has carefully posed the machine to make it look convincing. 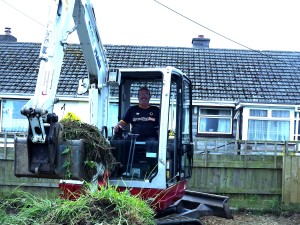 In the course of the Devon Journal interview, MyBuilder learns a little more about Jon’s stroke. It turned out that directly after it he was left blind and doctors thought he’d never walk again. Four years on he’s got his sight back and he’s mobile, albeit over short distances - testament to his determination and the body’s powers of recovery.

Jon’s a naturally friendly soul and clearly an active sort, so he explains that his limitations are a daily frustration. If he could have been out there sorting the garden himself, he would have been.

In the middle of the day, the Travis Perkins lorry arrives. Andrew has levelled the garden and is ready to start preparing the base for the patio, which will be laid today along with the turf. While the driver Mike Edge unloads, Andrew stops to explain his garden concept. 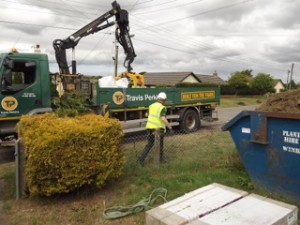 The patio area will be in the left hand corner of the garden, facing magnificent views across the Devon hills. Trellis with clematis growing up will be put up around it to create some privacy and a row of lavender will be put in to edge all.

All the time, Andrew has to think about Jon’s disability and how to make things easy for him. Jon’s stroke left him paralysed down his left hand side so all surfaces must be level and everything needs to be simple and low maintenance.

The rest of the garden will be laid to lawn, punctuated with donated fruit trees and woody herbs set in a curving flowerbed down the left hand side. There’s some discussion between Jon and Andrew about the need to water the turf when it is laid, particularly in the first two weeks, just to make sure that the roots take a firm hold and the turf doesn’t shrink leaving unsightly gaps. That causes a bit of a flurry on MyBuilder’s part – will Morrison’s donated hose on wheels (easy for Jon to use and manoeuvre around with his one good arm) be delivered on time? A hurried call is put in to Robert Caddy, who’s in charge of the Morrisons donations. 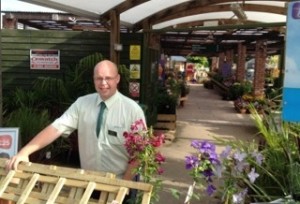 Next, the big drive to collect the plants and some trellis from Phil Newton at Jack’s Patch Nursery in Teignmouth. It takes far longer than expected thanks to dodgy map reading and no sat nav but the drive across Dartmoor is glorious and by late afternoon/early evening everything is in the garden ready for Andrew to start at 8.30 sharp.

Last stop is Exeter St Davids Station to collect Pete Miranda, MyBuilder’s cameraman. From now on, the job will be filmed so keep an eye out for the video and check out our Facebook reports!