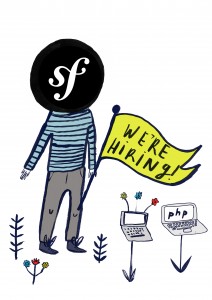 You don't need to be a tradesman to know that having the best tools makes doing a good job a lot easier. You might be able to drill a hole in a piece of timber with a crap drill from a DIY shop, but when you're trying to get through some tough masonry, it's a different story. Rubbish tools don't last very long either, so it's actually cheaper to pay for quality.

So that's what you say to your missus when she finds out how much your paid for your new router. But admit it, there's a bit more to it. It's subtle, but very real. Don't you find that it's a lot harder to take pride in your work when your tools are rubbish? Think about how it feels to use your favourite tool. That's what I'm talking about.

That idea is something we take very seriously at MyBuilder. I don't just mean with the website, but the tools we use internally. A good example of this turned up this week. We received a new batch of white, postcard sized cards. And then we sent them back immediately. I can imagine the stationery shop when they get them back. "The ink is just smudged on the top line, they still work! How petty." To them, they'll just be small cards. To us they're much more.

One of the workflows we have is that when we have an idea for the website, we write it on a card. The card is put up onto a wall for Jeff, our product manager, to look over and decide what to do with next. If the idea is worth working on, it'll get put onto a sort of "to-do" board. You could say that our business's success is tied very closely to these cards - these ideas.

Of course we could still write on them, but we'd feel a bit like we're using a dodgy drill. Our tools are important.

Sometimes working with good tools means putting in a bit of effort to keep them in shape. On the tech team, for the last half a year that's what we've been doing.

Symfony is the framework we proudly build the site on top of. I'm not planning on getting too technical, so I'll just say that it's basically the foundation of all our code. Many websites are built using Symfony - it takes care of the basic mechanics of a website, so we can focus on the features. Symfony1 was released seven years ago, so you can imagine that technology has moved on a fair bit since then. And so we decided to upgrade to Symfony2 when it was released earlier last year.

Hopefully, you won't be noticing much different about the site (except some shiny new buttons). That's very much how we in the tech team wanted it. But underneath the web pages that you see, the code that generates them has all been changed. Almost every line of the code has been touched since the last version of the website.

All this new code, on top of Symfony2, will help us write better features, faster. And with less chance of any of you bumping into any bugs. We're also hoping that whilst we're hiring the idea of working on shiny new Symfony2 will be more appealing than working with a dinosaur of legacy code. (I'm a relatively new hire, and I'm certainly happier for it!)

So yes, just like you, we take enormous pride on our work and our tools are an important part of this. Nothing makes us feel better than a job well done. This is one thing we definitely have in common with our customers.