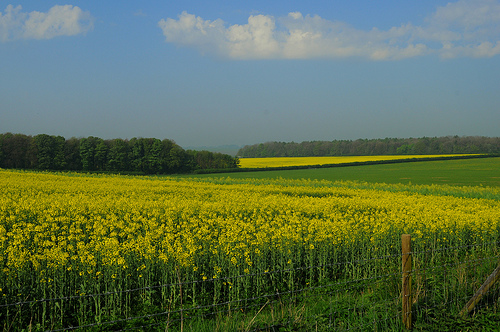 Being a spawn of the Evil Empire... I mean an American, you might expect me to be in favour of the rumoured plans for more building on Britain's green belt. Well, unlike a good few Conservative MPs and environmental campaigners, I am. And it's not just because I don't want to disappoint that brash American stereotype. I think I might surprise you with my reasoning.

Firstly, I really do care deeply about the environment and, having studied art and architecture at University, I care deeply about 'the built environment' and about the way things look in it as well. Growing up in the United States taught me that nature is beautiful beyond compare and that more or less everything man touches turns to shit. But living in France really changed my view on that. The natural beauty in France is amazing, surpassed only by the ancient villages dotted around the countryside. Architecture can be truly splendid and can even enhance the countryside. So why should we be afraid to build on the green belt that surrounds our urban areas?

Well, Britons do have cause for concern. Looking at some of the newer developments near to where I live, I do cringe to think of more monstrosities blighting the scenic English countryside. But hang on, aren't we talking about the wrong thing? Shouldn't we be saying 'no more ugly building'? Where is the campaign against ugly buildings?

The French seem to have this one nailed. I worked on a huge project in the South of France that needed planning permission. The drawings were submitted and approved, but the builder that I was working for liked to do his own thing. The end result only vaguely resembled the plans. Someone clocked this and the mayor of the village marched down to have a look. He said: "Yes, it looks nothing like the plans we approved. But, it's beautiful. So what's the problem?" We all had a glass of wine together on the terrace and that was that.

In terms of building, the French might say 'as long as it's beautiful' and the British might say 'as long as you follow the rules'. We all know that we need to build more houses, we just can't agree on where they should be built. But let's stop kidding ourselves. The real problem is that wherever we build, we assume it will be ugly. Imagine just for a second that every new build was the most amazing thing you've ever seen. People would be saying 'please build it in my backyard' and we wouldn't have this debate at all. Instead, we'd have a more beautiful country.

I don't see why planning can't be relaxed, as long as considerations for aesthetic value are front and centre. If proposal A is an ugly block of flats and proposal B is a stunning row of houses, I don't think the planning authorities should be afraid to grant permission to the more beautiful proposal for exactly that reason. 'Aha,' you might say . 'But what about affordable housing?' Yes, building something beautiful usually costs more and these new builds will go to well-off households. So what? Increasing the supply of housing will reduce prices across the board and other properties will become affordable. That's exactly how it works in the United States. People with more money buy new houses and people with less money buy older houses. Really old houses are obviously more again but you get the picture. The real benefit to the whole idea is that Britain will have better housing stock, more houses, more affordable houses and a better looking country. Isn't that what we all want?

Photo from Cast a Line.