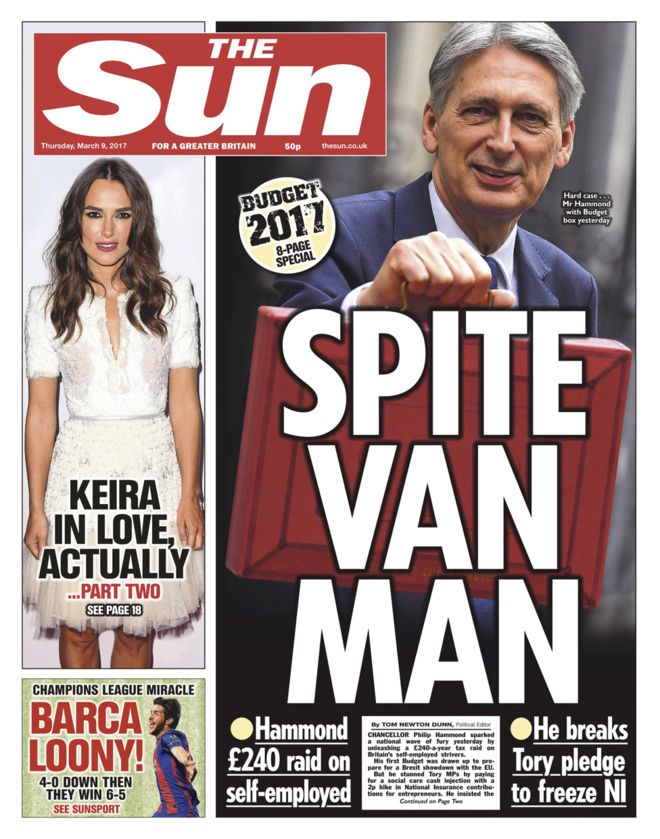 If you’re a self-employed tradesman, the newspaper headlines this morning wouldn’t have made for happy reading.

“Rob the Builder”. “Spite Van Man”. “No Laughing Matter” - the government has been criticised by all sides for its budget plans.

Some of the biggest news to come out of chancellor Philip Hammond’s budget announcement yesterday concerned the self-employed. If the plans go ahead, the Class 4 National Insurance contributions paid by self-employed workers, such as plumbers, electricians and decorators, will rise from nine per cent to 11 per cent in April 2019. According to the Sun newspaper, the move will hit 2.84 million people, costing them each £240 a year.

At the same time, sole traders who have become incorporated and pay themselves with dividends instead of an annual salary will also be hit, with the tax-free amount they can hand themselves cut from £5,000 to £2,000 a year, which the Sun estimates will be an average hike of £320 a year for 2.2m workers.

In a case study, the paper looks at self-employed painter and decorator Sandie Webster, who’ll be out by £60 a year when the changes come in. The Lincolnshire tradeswoman will benefit from Class 2 National Insurance being axed, only to be hit by the rise in Class 4. “With no holiday or sick pay, I’m thinking twice about whether I should give up being self-employed,” she told the paper.

The government, which has previously pledged to freeze or cut taxes, is facing a backlash from its own MPs over the proposals, with former Tory minister Andrew Murrison expressing concern for the people running their own businesses: “This party on this side has always been, I hope always will be, the party that supports white van man.”

Pressure is growing on the chancellor to backtrack on the National Insurance changes - but at the moment, he’s insisted they will go ahead.