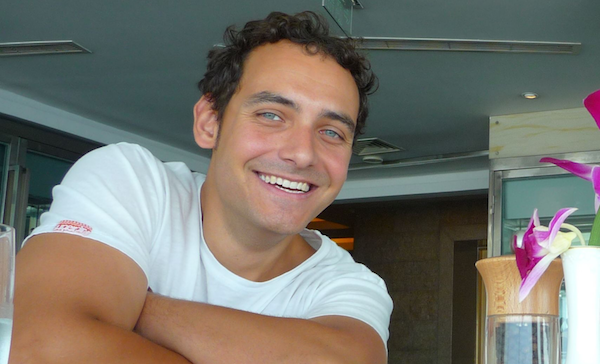 For Alix St. Claire, the decision to become a full time painter and decorator was not necessarily an obvious one. We joined the man behind Alix James Decorators on a sunny day in Brighton to find out what made him choose a career path so different from his degree in primary education, and to learn about the work he’s currently doing on the Brighton Dome.

Getting Into the Trade

From a young age Alix helped his father with painting and decorating jobs, and by 12 years old he was taking a wage for his work. “It snowballed from there”, he told us. “Whatever needed doing, I’d be doing it on my own from then on”. Alix continued taking jobs throughout school, and in between embarking on a chalet season in Meribel and moving around the country, Alix continued painting and decorating as his main source of income. However, after a few years Alix faced feelings of uncertainty. “I was getting to that point in life where I was worrying a bit”,  Alix said. “I kept thinking I needed something official, like a prescribed career path that wasn’t a trade”.

At the age of 24, Alix undertook a degree in primary school education which brought him down to Brighton. Despite realising half way through the course that he wanted to return to his trade, Alix was determined to finish, telling us; “I’m a completionist - I don’t like quitting things”. Finishing a degree he wasn’t passionate about followed by taking a year out to travel the world culminated in a revelation for Alix. “We have the luxury to be able to choose our own lives. I came back with the ethos that I’m actually bloody lucky, and it doesn’t really matter what you do in life as long as you’re happy. That’s the most important thing. I should be grateful for the position I have in life, so I thought I’d get on with it and enjoy myself. So that’s what I’ve been doing ever since.”

When we met Alix he was preparing to start work replacing a curtain wall on a beautiful seaview flat, and Alix James Decorators has had more than a few exciting local projects. The most notable of these is on the Brighton Dome, Brighton’s historical multi-arts venue. Proudly donning his ‘Access All Areas’ pass, Alix told us; “they’re doing a refurb in the bowels of the building, and it’s a massive rebuild”. He’s not exaggerating - his work has covered meeting rooms, offices and the Founders Room just to name a few, so it’s no surprise when he tells us; “I’m constantly getting lost - it’s like a rabbit warren in there!"

Alix’s Inside Tip on Quoting

Alix’s advice for impressing clients is to promptly put together a professional, detailed quote. He tries to give quotes within three hours, and to ensure his clients know where they stand he avoids estimates as he feels they are “too open ended, whereas a quote is more set in stone”.

His gratitude for the opportunity to quote for big restoration and refurbishment jobs is reflected in his formal approach. “When you’re talking about big money, the quote deserves respect - not a text with bad spelling”.

Alix also emphasised the importance of a comprehensive quote, telling us; “I’m really explicit in my quotes. I’m not going to list every tiny detail (like petrol or tooling costs) or the client will think you’re taking the mick, but I break it down so it’s fairly obvious to them - it’s all there in the quote.”

So far, Alix has had only positive experiences with MyBuilder, and we have no doubt this will continue - we wish him the best of luck in his future jobs!

Check out Alix's profile on MyBuilder