When choosing the right insulation installer, there are some key issues you need to think about. In this article, we’ll take you through them step by step.

Before you ask any tradespeople to quote on your insulation job, find out if you’re eligible to get a grant to pay for the work.

The Energy Company Obligation (ECO) is a government energy efficiency scheme to help reduce carbon emissions and tackle fuel poverty. Under ECO, Several energy providers offer free or reduced cost insulation on suitable homes - regardless of your income. Others require you to be receiving certain benefits.

The good news is, you don’t need to be a customer of a particular firm to get a grant from it. It’s estimated that cavity wall insulation and loft insulation combined costs, on average, around £800 - so it’s well worth finding out if you’re eligible.

The details of each energy provider’s eligibility criteria can be found on this page of MoneySavingExpert website. Alternatively, you can call the Energy Saving Trust to ask what help you might be able to get: 0300 123 1234 in England, Wales and Northern Ireland, or 0808 808 22 82 in Scotland.

We can help you meet professional insulation specialists near you to get real quotes today.

If you are eligible to receive an insulation grant via the ECO scheme, you will need to use an insulation specialist who has PAS 2030 approval. This is a standard, set by the government, that all ECO installers must be compliant with.

MyBuilder member Chris Maple of Green Efficiencies Ltd is government approved with PAS 2030 to fit a range of domestic insulation. He explains how the accreditation process works, and how his work is quality checked:

“There’s a certification and compliance body called Stroma. There are a few, but that’s the one we use. They check around 10% of our jobs, make sure they’re fine and sign them off.

The manufacturers of the materials we use also come out and check on us periodically while we’re doing jobs.

In the case of cavity wall insulation, our work is guaranteed by the Cavity Insulation Guarantee Agency - they also audit us on a certain number of jobs.

And once we’ve claimed funding for a job, it’s also checked by Ofgem inspectors. They do reports on every property we’ve worked at. All these steps are part of being PAS 2030 approved.

If your job doesn’t involve a grant, you don’t have to use an installer who is approved in this way. However, Chris argues, using an approved installer does indicate their work will be to a high standard:

Even if a homeowner is paying for a project themselves, and there’s no grant, we follow the same guidelines and adhere to the same standards.

So for example, when we do loft insulation the guidelines are that any existing pipes need to be insulated, any tanks need to be brought up to standard. These standards apply to every job I do, not just the ones that involves government grants.

Check whether they’re a member of a competent person scheme

Certain types of insulation - including external wall insulation - need to be given building regulations approval. It’s therefore worth asking each tradesperson you’re considering whether they are a member of a competent person scheme related to insulation, like the CIGA or Stroma schemes.

If they are, they will be able to self-certify their work, rather than needing to get someone from the local building regulations team to look at it.

Get a detailed quote from each tradesperson you’re considering

All insulation specialists should provide you with clear, detailed written quote. This should break down all the possible costs involved, from labour and materials to what percentage of the total cost is covered by a grant (if any) and whether VAT is included.

Make sure you get the same information from all the tradespeople you’re considering - so you can compare them like with like.

Never pay the full amount for a job upfront; instead, wait until the project is complete and you’ve inspected the work thoroughly.

Don’t assume a generalist will always be cheaper

You might assume that hiring a general handyman or builder to fit your insulation will be cheaper than opting for a specialist. However, as Chris explains, this can be a misconception:

Hiring an insulation specialist, rather than a more general builder, could actually save you money. For one thing, specialists buy in bulk, so we often get cheaper rates on materials.

The ways people charge for their labour vary, too. For example: If a standard builder was going to do a 40 square metre loft insulation job, they would probably buy about ten rolls and pay about £20 per roll. Then they’d charge a full day rate of about £150 to do the job, although it would actually only take them around half a day to do it.

I charge per square metre, instead. When I go and see a property, I work out the square meterage cost and only charge the homeowner that specific amount (minus whatever grant might apply). So it’s definitely worth a homeowner asking every tradesperson they’re considering: ‘What’s your charging structure?’ Get them to break it down.

Finally, I recommend homeowners ask about the rate of VAT each tradesperson pays. Because we’re an energy company, rather than a general builder, we’re able to claim 5% VAT on energy products, as opposed to 20%. And we can then pass that saving on to the homeowner.

Choosing the right builder for your loft conversion 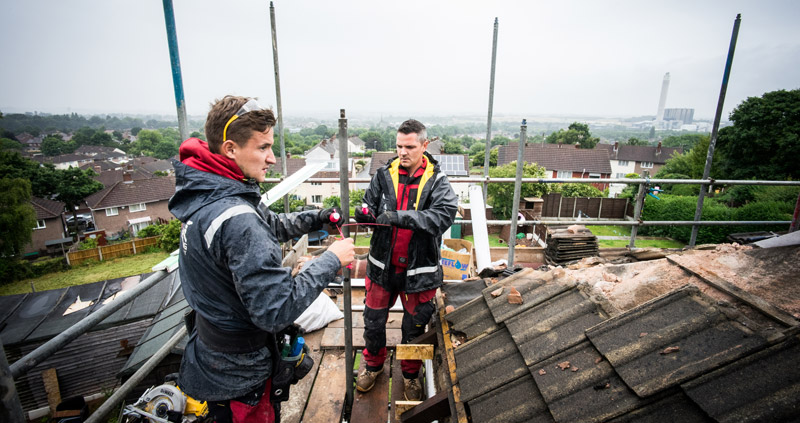